Can You Leave a Griddle Outside? 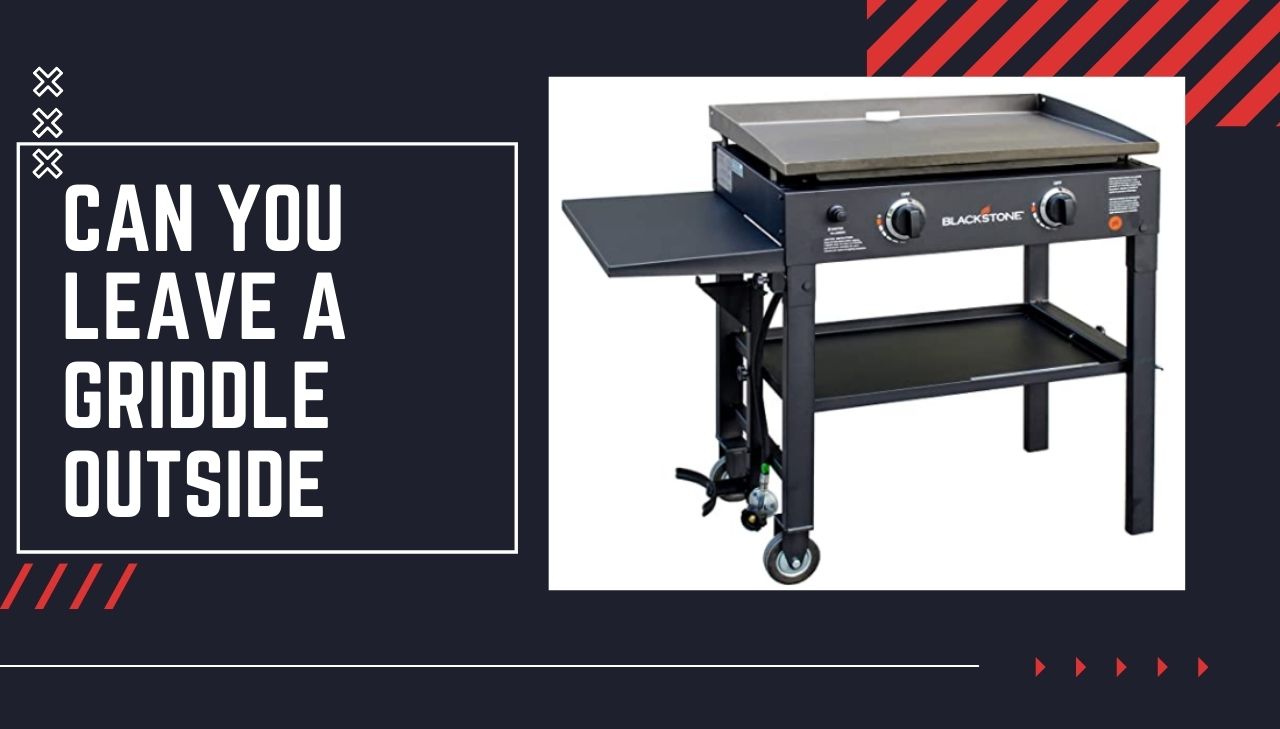 Some people believe that a griddle should never be left outside because of the weather.

However, this is not the case. If you take basic precautions and use your common sense then it can be done without any trouble at all. The most important thing to do before leaving a griddle out in inclement weather is to cover it with plastic wrap or some other protective layer so that the moisture cannot get through and cause rusting on the metal parts of your griddle.

The next step would be to place something heavy over top of it such as bricks or rocks so that if there are any strong winds they will not pick up the covering and blow it away with ease leaving your grill unprotected from possible damage due to rain. The final step would be to never leave a grill outside for an extended period of time. If you're going to use the Blackstone griddle inside you should not let it sit outside for days on end because this could result in mold growing and other moisture related problems.

The most important thing is to keep your griddle protected from inclement weather and then any worries you may have about leaving it outside for a short period of time should be left behind.

Who Should Buy A Griddle

One thing to keep in mind if you decide to purchase a griddle is that they do not take up much space at all and will easily fit into any garage or basement without worry. This means that there will always be room to store it when you're not using it. Having said that if you can't store it somewhere convenient then you'll more than likely just use it less often which will defeat the purpose of buying one to begin with. Moreover, as explained that if used wisely then the answer to can you leave a griddle outside is yes!

The most important aspect of having a griddle is for cooking connoisseurs. If you are only an occasional cook and aren't into making fancy meals then you might be better off with a regular grill or an outdoor gas unit. If you decide to purchase a griddle and use it in the right way then it should bring years of enjoyment and lots of good food too. This is why we have one at home because we love cooking on one and it can save us money in the long run also.

What Is A Griddle Made Of?

A griddle is a cooking device that has been around for centuries. It was originally used to cook food in large batches such as pancakes, bacon and eggs, but today it can be used for just about any type of dish.

The main ingredients of a griddle are steel and aluminum which make up the body and base respectively. The handle is usually made from cast iron or stainless steel with wood or plastic handles being an optional extra. For the top part there's normally some form of non-stick coating such as Teflon.

A heavy gauge material would be needed so that there would be no warping when you're using it at high temperatures - this could also help prevent rusting if the griddle does come into contact with water. The main benefit of having a Blackstone 28 griddle is that it can go from stove top to oven or microwave without trouble at all due to the nonstick surface, making cleaning up after use easier than ever before.

How Do I Care For My Blackstone Griddle?

There are many ways to care for your griddle which is why it's important that you take the proper precautions when using and storing it.

One of the most common reasons people have trouble with their griddles is because they don't clean them properly after each use. This can lead to rusting, warping and other problems which could be avoided by following a few simple steps. The first step would be to let the griddle cool down before cleaning as this will help prevent any damage from occurring if you're not careful. Next, make sure that all food particles are removed so that no bacteria or mold will grow on your grill during storage time. A good way to do this while keeping your hands clean at the same time would be to use a brush.

The griddle must be heated to a certain temperature before it is put to use. This is important for getting the items cooked correctly without worrying about food sticking. It is often recommended that you preheat the griddle for at least 15 minutes. There are various types of griddles that can accommodate different needs as well, so if you are cooking something greasy or sticky then you will want to use a flat top griddle.

If you are using a Blackstone griddle for pancakes and want to have them cooked perfectly then it's best to use one that is slightly oiled so that they don't stick. It's also important to season your griddle before you begin cooking, especially if it is new. This will help prevent food from sticking and make the surface easy to clean. A complete guide on whether can you cook a pizza on a Blackstone griddle is provided so that you can understand the advantages of temperature management with Blackstone Griddle.

A griddle is like any other metal cooking grill and requires the same type of care. The rule of thumb is that you should never use metal utensils to clean your griddle. Rather, use a spatula or wooden utensil and a coarse detergent will also work. Wipe it clean and dry with a cloth then coat it with cooking oil before storing. This process will help maintain the life of your griddle and keep it free from rusting.

The most important thing to remember is that you should not use soap or water on the griddle. This could leave residue which won't be easy to clean off, but it can also cause your food to taste soapy and salty after cooking which isn't pleasant at all.

Another problem some people face is that they put their griddle in the dishwasher after cleaning and think that they are doing it a favor. This not only makes it too easy to scratch but many of the dishwasher's chemicals aren't good for your grill, which could cause rusting or other damages over time. The best thing you can do is to follow the advice above and keep your griddle in good shape.

Griddles are the most important piece of cooking equipment in any kitchen. When griddling, it is important to clean the griddle when you are done. Griddles need to be cleaned on a regular basis and not just when they start to look dirty. There are many different methods for cleaning a Blackstone griddle and few of them are discussed

How to store Blackstone Griddle?

It's important to clean and season your griddle before storing it.

There are many ways to store a Blackstone griddle and none of them are perfect. The best way is probably going to be the one that you will be able to do most often. Whatever storage method you choose, never place anything greasy or sticky on top of the it until it has been cleaned and seasoned because this could prevent the seasoning from adhering properly in order not only to protect against rust but also make food taste good when cooking with it again in the future.

If there isn't a lot of space, then another option might be hanging your griddle by its handle on a hook inside an upper cabinet door if available. If not, then an over the range cabinet where it can be hung over an empty space will also work fine.

Another option is to store cast iron in a box that has been lined with a trash bag. This should keep moisture away from your cast iron and prevent rust as well as dust build up. The box should be kept in a dry, cool place.

A griddle cover provides protection of your outdoor griddle. The cover will protect you from rain and snow. The outdoor griddle can be used to cook breakfast, lunch or dinner. A cover also helps to prevent the food on the grills surface from getting cold. The griddle cover can also be used to protect the surface from any debris that may fall. The exterior of the cover is made up of a heavy duty, fire resistant material. This material helps to prevent burns and melting in case if something catches on fire or if an object falls on it.

Can you leave a Blackstone Griddle Outside?

The manufacturers say it is best not to leave it outside for a long period of time since it will rust and other items might be attracted to the surface. If you decide to leave the griddle outdoors, it is advised that you keep it covered. The covering will help prevent rust and protect against any light rain or other elements.

No! A Blackstone griddle will cook the food at a lower temperature than the outside air. The amount of insulation in a Blackstone Griddle is very little and does not help to control the temperature. On top of that, we use special insulating material on the cooking surface to make sure it doesn't get too hot or cold which allows even more heat from your charcoal grill to transfer into your food.

A detailed overview of what the griddle is made of and can you leave a griddle outside is provided. Who should buy Griddle and how you can increase its life is also mentioned. Finally, you are provided with some tips on how to season your griddle

Article written by Kathy Jeffery
Kathy learned to cook early on in life because she had to feed the ranch hands! Kathy is a mama of 2 boys and dreams of having a vegetable garden one day.

How To Turn On Dyna Glo Grill

All product and company names are trademarks™ or registered® trademarks of their respective holders. Use of them does not imply any affiliation with or endorsement by them.

grillsguide.com is a participant in the Amazon Services LLC Associates Program, an affiliate advertising program designed to provide a means for sites to earn advertising fees by advertising and linking to Amazon.com.